Edward Dromgoole (1751-1835) had emigrated from Ireland to America in 1770 and had been converted from Catholicism to Methodism. By all accounts Dromgoole an inspiring and dedicated minister. While preaching on the Brunswick Circuit, Dromgoole met, converted, and married Rebecca Walton, daughter of wealthy planter, John Walton. Rebecca and Edward initially established their home in southern Brunswick County on property near her father’s home near Quarrel’s Swamp shortly after their marriage in 1777. In the late 1790s Edward acquired property further south in the county on which they built “Canaan” their home and the home of their family for generations.

Through the years Dromgoole acquired extensive lands in the Valentines area and operated a thriving plantation and a store, named “Sligo,” which was the name of his home town in Ireland. He was also a magistrate and a member of the County Court for 45 years. He rode the circuit until about 1784, then located and preaching at Woolsey’s Barn, Mason’s Chapel, and Olive Branch Methodist Chapel, which was established about 1801 near the Dromgoole home.   Dromgoole was devoted to the cause of freedom. During the Revolutionary War, Dromgoole read the Declaration of Independence from the courthouse steps in Halifax, NC for the benefit of those who could not read.

The Dromgoole home was frequently visited by the American Bishop Francis Asbury. Asbury recorded in his journal on February 12, 1815: “I preached at Dromgoole’s house. … I ordained Edward Dromgoole an elder in the Church of God. Edward Dromgoole was born in Sligo; joined the Methodists in 1770; began to exhort in 1774; travelled in America from 1774 until 1785; since then he has been a faithful local preacher, respected and beloved: he has six children living, two of whom, Edward and Thomas, are local deacons.”*

It was at Canaan that Bishop Asbury, Reverend Peter Pelham and Dromgoole met to organize Ebenezer Academy, which was the first Methodist school in America and is another important site in Brunswick County located off Route 1 north of Alberta near Warfield. Canaan was also the birthplace and home of Edward’s youngest son, George Coke Dromgoole, who served in the Virginia House of Delegates and Senate; in the US Congress for 9 years where he was serving at the time of his death in 1843.

* There was no provision for Methodist ordination when he entered the ministry. (Journal and Letters of Francis Asbury, Vol. 2; page 774 and notes)

Newly married Edward and Rebecca began to acquire property in Brunswick County in 1778 when Rebecca’s father John gifted 200 acres of his home property on Quarrel’s Swamp, which is south of the Meherrin River. Edward added 288 acres to the tract between 1782 & 1788.  Then in 1796 Edward purchased 330 acres from Benjamin King further south along Beddingfield Creek in Brunswick County and sold the original 200-acre gift to Ira Ellis in 1799. It is believed that the King tract is the location of the plantation home built circa 1798 according to dendrochronology tests performed in 2018. Over the next two decades the Dromgoole family continued to add to their land holdings in southern Brunswick County. The plantation home and property was passed down through the Dromgoole male heirs until the death of Edward Dromgoole IV in 1920 and the property passed to Edward IV’s wife, Mary Virginia Bradley Dromgoole (they had no children).

In February 1924, the plantation was 1,423.99 acres and still owned by Edward IV’s widow Mary Virginia Holt who had married W. B. Holt by this time. Under her ownership it was subdivided into 29 tracts by Atlantic Coast Realty Company. The house “Canaan” was on tract # 5, which was sold to R.J. Clary, Jr. with other tracts totaling 230.76 acres, on February 25, 1924. In 1947, Mr. Clary sold the same amount of land to Madeline Hutcheson. It was conveyed to William Grady Pearson from Madeline Hutcheson December 20, 1949. In 2008, 16 acres containing the house was deeded by the Pearson family to The Old Brunswick Foundation.

The site is located .5 mile east of Route 46 (a Virginia Scenic Byway) .8 mile north of its intersection with Route 626 (Gasburg Road).

In 2008 in order to preserve this architectural and historical gem, the Foundation purchased the Rev. Dromgoole house and 16 acres.   The long term goal is to preserve and restore the house and grounds and to add a structure for meetings and retreats in this quiet natural setting. The house will serve as the focal point and visitors will be able to watch progress as the house slowly undergoes restoration. The house reconstruction and research into the life and times of the Dromgoole family can serve as a tool for teaching and study. 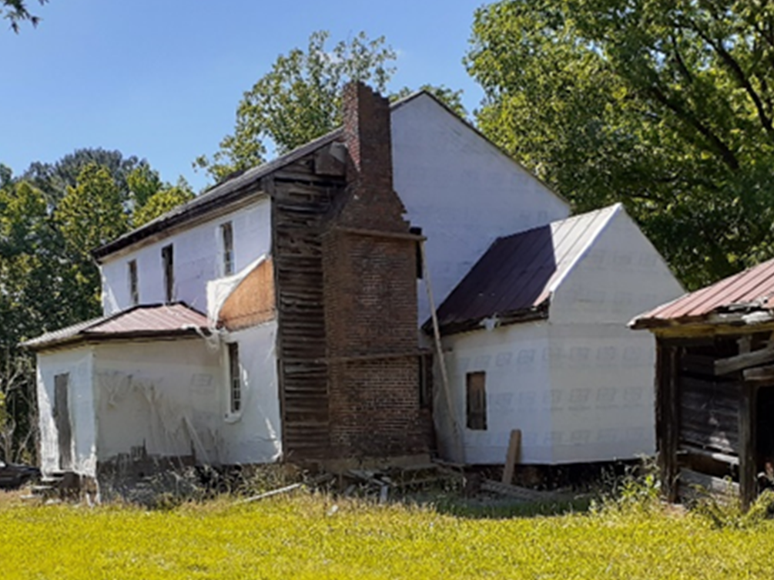