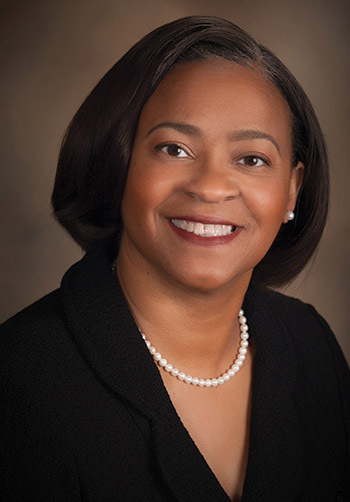 Bishop Sharma D. Lewis, resident bishop of the Richmond episcopal area, became the first African-American woman to be elected bishop in the Southeastern Jurisdiction of The United Methodist Church in 2016.

Prior to her episcopal assignment, she held a distinguished record of service in the North Georgia Conference including her appointment as district superintendent of the Atlanta-Decatur-Oxford District in 2010. In 2007, Bishop Lewis’ remarkable pastoral leadership at Wesley Chapel, a three-year tenure, led to over 600 new and restored members and worship attendance doubled. While there, her visibility as a strong spiritual and pastoral leader propelled her into numerous leadership roles in the local community, including Hands-on Henry County and Many Hearts, Many Hands McDonough. Her ministry here culminated as she received the Harry Denman Award for Evangelism in 2010 as well as the G. Ross Freeman Leadership Award. Prior to these roles, Bishop Lewis was appointed in 1999 as the associate (and subsequently senior associate) pastor of the 8,000-member Ben Hill United Methodist Church in Atlanta and as senior pastor of the Powers Ferry UMC, a cross-racial assignment in Marietta, Ga.

Bishop Lewis has offered her gifts to The United Methodist Church in a variety of ways. She is currently the Vice and Personnel Chair of the Gammon Theological Seminary Board of Trustees. She is a member of the Black Clergywomen and Black Methodist for Church Renewal (BMCR) of The United Methodist Church. Bishop Lewis has also been appointed as the liaison to the Interagency Sexual Ethics Task Force (IASETF), a task force of the General Commission on the Status and Role of Women. She serves on the Board of Governors for Wesley Theological Seminary and as ex-officio of the five United Methodist colleges in the Virginia Conference. She is also a member of the Southeastern Jurisdiction (SEJ) Committee on Coordination and Accountability (CCA) and a member of the Study Commission Ministry (GBHEM). The North Georgia Annual Conference honored Bishop Lewis by electing her as the first African-American female to lead the delegation to the 2012 General and Jurisdictional Conferences. In 2015, she was once again voted to lead the delegation to the 2016 General and Jurisdictional Conferences.

Bishop Lewis was born and raised in Statesboro, Ga. in a loving Methodist family where individuals have answered God’s call to serve the church and to minister to God’s people. A graduate of Mercer University (B.S., Biology, 1985), the University of West Georgia (M.S., Biology, 1988), and Gammon Theological Seminary at the Interdenominational Theological Center (M.Div., 1999), Bishop Lewis worked as a research biologist and chemist prior to surrendering to God’s call upon her life. She has led mission experiences to Jamaica, Kenya, and the Philippines.

Bishop Lewis is the recipient of the Wesleyan Theological Society Award and the Scouting Silver Torch Award. She is the recipient of the 2014 Gammon Theological Seminary Distinguished Alumna and Trailblazer Award given by The National Coalition of 100 Black Women Inc., Metropolitan Atlanta Chapter. Bishop Lewis is a member of the Atlanta Alumnae Chapter of Delta Sigma Theta Sorority. She has received the Delta Sigma Theta Pinnacle and Torch Award. She is the author of Journey to Transformation,(2020, 2021, and 2022 Lenten Study).