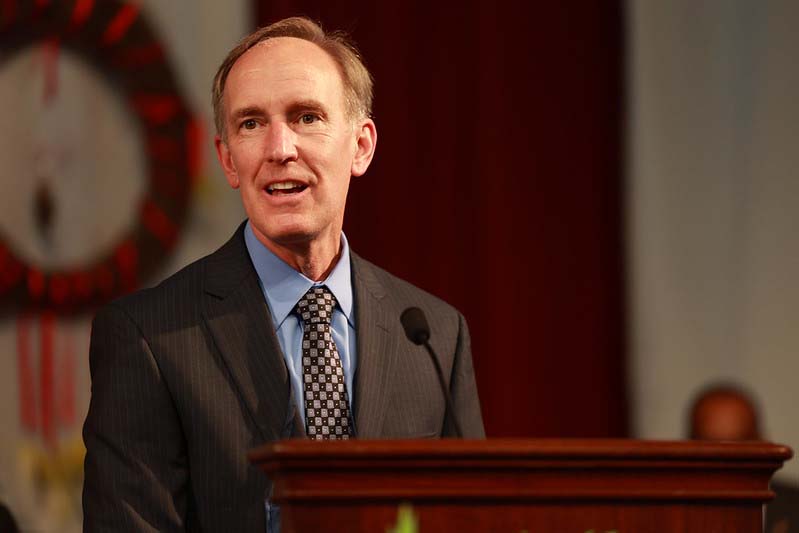 Delegates elected Berlin, age 59, Nov. 2, at the jurisdiction’s meeting at Lake Junaluska, North Carolina, on the fourth ballot. He received 213 votes out of 346 valid ballots cast. He needed 208 to be elected. (60% of valid ballots)

Berlin was the first bishop elected at the Nov. 2-4 meeting.

Berlin thanked his wife Karen and members of his Floris UMC staff who drove to Lake Junaluska to support him. He thanked the people in the room: the delegates, the bishops, and all those with whom he has served in ministry and collaborative work.

“You all have been such a great blessing to my life and to be elected as a bishop is a singular honor,” Berlin said.

He ended, “Thank you. It is oddly humbling to stand before you and to accept this special assignment.”

His two-year term of service begins Jan. 1. In the United States, bishops are elected to serve for life.

Berlin was the endorsed candidate of the Virginia Conference. He grew up at Braddock Street United Methodist Church in Winchester, Virginia, and he received a call to ordained ministry while serving as a summer counselor at the Tennessee Outreach Project (Mountain T.O.P.) mission camp in Ozone, Tennessee.

After graduating from Virginia Tech, he earned his Master of Divinity degree from United Methodist Candler School of Theology in Atlanta and entered ordained ministry in Virginia in 1988. He subsequently was appointed pastor of the Brucetown-Welltown Charge in Frederick County followed by appointment as pastor of Toms Brook United Methodist Church in Toms Brook.

Since 1997, he has been lead pastor of Floris United Methodist Church in suburban Washington, D.C. The congregation has grown from an average worship attendance of 400 when he began his appointment to 1,200 before the pandemic. Under Berlin’s leadership, the church also launched two satellite campuses — Restoration Reston and Restoration Loudon. The congregation’s combined online and in-person attendance is now around 1,000. The church also has been in partnership with the Sierra Leone Annual Conference since 2000.

In recent years, Berlin increasingly has taken on denominational leadership roles in efforts to help The United Methodist Church cross its deep divisions over LGBTQ inclusion. The Council of Bishops appointed Berlin to serve on the Commission on a Way Forward that developed proposals for the special 2019 General Conference intended to resolve the decades-long debate.

When that special session of the denomination’s top lawmaking assembly failed to end the turmoil, Berlin was part of the team that negotiated the Protocol of Reconciliation and Grace Through Separation. The mediated agreement is heading to the next General Conference, which is now postponed by COVID-related complications to 2024.

Berlin was among the centrist members of the negotiation team. He has backed proposals that would leave same-sex marriage up to local churches and gay ordination up to annual conferences.

He and other new bishops are coming aboard as the denomination deals with the continuing fallout of the COVID-19 pandemic and rising congregational disaffiliations amid a denominational splintering without the formal separation of the protocol.

In The United Methodist Church, bishops are ordained elders who are called to “lead and oversee the spiritual and temporal affairs of The United Methodist Church.” Bishops, in consultation with district superintendents, are responsible for appointing clergy. They also preside at annual conferences, jurisdictional conferences and General Conference, the denomination’s top lawmaking assembly.