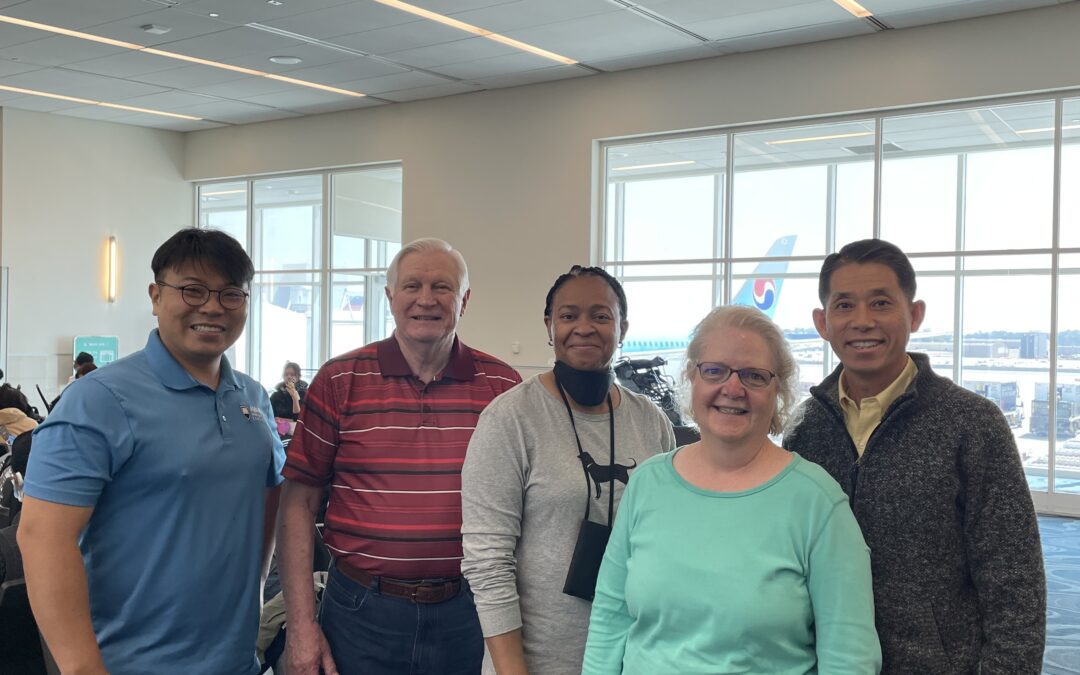 Starting on May 16, 2022, 6 members of the Virginia Conference United Methodist Church will visit Korea to explore a missional partnership with the Korean Methodist Church for the mission in Vietnam.

We will journal our journey, along with pictures of the trip.

The team was invited to tour the Joint Security Area, the only area in Korea where you can cross over the Demilitarization Zone (DMZ). This was made possible with the support of Bishop Chungsuk Kim, who is the host of the Korean trip. However, you might still think, why? Because understanding the hurt of the people can be the best way to understand and learn to solidify the trust.

Bishop Chungsuk Kim, South Seoul Annual Conference, and KMC Mission Board Chair joined us and led us in every step. Starting from learning the history of JSA, and walking over a step to North Korea and coming back. It was an inspirational time to experience the hurt of this nation, and promise for a better future through partnering together.

Our second was to visit all potential partners for the mission in Vietnam. We first visited Kwanglim Methodist, which is the host for this trip. Kwanglim Methodist Church is the largest Methodist Church in the world and has been known for its passion to ‘Teach, Proclaim, Heal’ the world through the power of the Gospel. We were able to witness their integrity of being faithful to the tradition while creating new ways to serve the community.

Female Clergy Association, South Seoul Annual Conference – Bishop Lewis was invited to speak with the Female Clergy Association of the South Seoul Annual Conference. Despite being the first denomination to ordain a female clergy, in 1931, Korean Methodist Church has a small number of female clergy, who are faithful to their call but facing an enormous amount of challenges as a minority voice. The time of sharing and reminding them of God’s calling was powerful!

Korean Methodist Headquarters – We then moved to the Korean Methodist Headquarters, which is located at the heart of Seoul. There we met with President Bishop Lee, Chul, who is the President Bishop of the General Conference of the Korean Methodist Church. Bishop Chungsuk Kim, also joined us in the meeting, accompanied by Rev. Ilyong Oh, General Secretary of KMC, and Rev. Youngyoon Lee, Chief of Staff of the General Conference. We confirmed how we are committed to a continued conversation of partnership.

Interview with Kookmin Daily – Kookmin Daily, a media group and newspaper company, interviewed Bishops Lewis and Kim on how KMC and UMC can continue their partnership for the Kingdom of God. Interview article link (Google Translate is available)

By the time we ended the tour, the representatives from GBGM APRO, KMC Mission Board, and the Vietnam Mission Society arrived at the church’s coffee shop. The team engaged in a conversation on how we can partner together in a mission for the people in Vietnam. The Wesleyan Daily wrote an article about this meeting. Wesleyan Times article (Google translate is availiable)

Then the team went to visit Yanghwajin Foreign Missionary Cemetary. Did you know that more than 150 foreign missionaries are buried in Korea, completing their service for our Lord? The seed of their love grew into the Korean Church.

After a busy schedule, the team decided to take a break in the morning. In the afternoon, the team did some sightseeing touring the shopping mall and walking through Insadong, a Korean traditional street.

Bishop Lewis was able to preach during the 2nd and 3rd services. And after the service, Bishop Chungsuk Kim presented the ‘Prayer of Jabez’ written in calligraphy as a gift to the Bishop and Virginia Conference. Recording of this service is available.

Nazareth Chapel Dedication Ceremony – The team was invited to join the ribbon-cutting ceremony for the Nazareth Chapel, a 300-seat chapel that will be used for the middle school service.

Wesley’s Conversion (Aldersgate Sunday) Cluster Revival – Bishop and the team were invited to join the cluster revival of 3 districts in the South Soul Methodist Church at Immanuel Methodist Church.

The team visited Yonsei University, Rev. Dr. Hyo Lee’s Alma Mater. Yonsei University was founded by a Presbyterian missionary, while Methodist joint effort, to make this university one of the best schools in Korea.

We ended the day by stopping by Kwanghwamoon, the palace of the King during the Choson Dynasty.

Our day started by meeting at the hotel lobby at 5 am. We then drove to Myungsung Presbyterian Church, which is one of the largest Presbyterian churches in Korea. They have 4 dawn prayer meetings every day, and the 6 am prayer meeting we were planning to attend had around 1,500 people coming out to pray. We were greeted by a group of lay leaders and the hospitality of the church, at 5:40 am, was amazing.

Kwanglim Prayer Mountian is one of the four retreat centers of Kwanglim Methodist Church.

The final official stop for the day and our trip was to visit Appenzeller World Mission Center. AWMC was originally built by the Indiana Annual Conference, as a dormitory for the students at Methodist Theological Seminary. The original name for this building was Inwoo Haksa, which means Indiana’s friend’s Student Dorm. However, after two renovations, the dorm is now a missionary residence house, for overseas missionaries visiting Korea.